It’s Not Who You Know, It’s Who Knows You: the Mentor Effect

Build Your Support! Why? Successful women have the right networks, mentors and sponsor. BUT we regularly hear from women (especially in developing and emerging markets) who report not having mentors or knowing where to start to get the right support. We’re here to help you do just that. Keep an eye out this week for vital tips to infuse your path to professional success.

“I graduated high school in Nairobi (Kenya) and enrolled in an engineering program at a technical school. When I transferred to the University of Kansas (KU), I had never been to the U.S. before,” Angela Oguna Oruoch said.

It was then that the mentor effect really began to take shape in Angela’s life.

“I had an engineering professor named Dr. Jim Roberts who my first sponsor and champion. He spoke on my behalf and went out on a limb for me. He helped me by transferring most of my credits from my Kenyan school to KU, saving me an entire semester of school. I was able to finish my degree in three and a half years. Everything he did for me made a difference in how I studied.”

Another professor, Dr. Mindin, hired her as a research assistant and helped Angela to build good relationships and experience. After doing research for two years, she got a summer internship with Black & Veatch, which eventually led to a position at the leading engineering firm post-graduation. Today, she works at Black & Veatch as an Electrical Engineer 1.

“That’s been my biggest thing,” Angela said, reflecting on the impact of her mentors. “If you don’t have the system to transition from the classroom to the workforce, you need to have a person (a sponsor) work for you from the inside. People make it sound like a bad thing, but it is good to know others who can vouch for you. It’s not the people you know, it’s who knows you.”

During her first semester of college, she also joined the National Society of Black Engineers (NSBE) and became secretary. This proved to be another great opportunity to network and meet mentors.

“At a NSBE conference in 2010, I met another electrical engineer who worked at an engineering consulting firm based in the same area.” Angela said. He had been an electrical engineer for a long time, so she used the opportunity to build a relationship where she could regularly seek his wisdom, expertise and experience.

“Now I meet him four or five times a year and we sit on same board for NSBE. He made me want to mentor other people as he mentored me,” Angela said. “There is always a chain, and we should pay it forward too.”

Angela said she’s learned that you can never over-network.

“You need to know people. Just grab them, follow up, say nice to meet you – then four or five years down the line when you need a contact, you have one. But it is not just someone to drop your name; mentors help to open up your mind to other jobs or opportunities that you may never have considered.”

Angela originally came to KU because she had family friends in Kenya who had gone there before her. She believes they also mentored her by their examples, progressing quickly by graduating in four years and then getting jobs immediately afterward. They helped smooth her transition in a new country. In fact, Paul – her main mentor when she came to KU, was one of those longtime family friends: “I ended up marrying him,” she laughs, recounting the story. Paul is a chemical engineer at a different large, well-known company like Angela’s, and while they both live happily in Kansas, they have some big long-term goals for the future.

For Angela, she wants to become an expert in her field so she can play a role in the electrification of Sub-Saharan Africa.“When infrastructure is set up, it influences everyone’s everyday life – healthcare, business, and the education system,” Angela said. “I’ve been immersed in American culture for five years now, and it is very progressive, but it won’t translate [to Africa]. You have to find what works there, enable the people in Africa to find a way to make it viable and have people buy in and be a part of it. As for now, I want to become very efficient in my job – the basics, technical aspects, and specifically in learning about power, so I can translate that into a model that would be successful in African households and communities. I believe if all of us [in Africa] work on our education, and do a small part, we can make it happen.”

Learn more about and from Angela:

Her advice to other young women in Kenya?

“Find a mentor – several mentors. It doesn’t have to be formal. Approach someone who is in a field you are interested in, like a doctor, and make that interest known so that they can be open and share their path with you – you can avoid their pitfalls.”

What has made you successful and ambitious?

“My mom has a lot to do with it; she really set the pace for me. She went back to school when she was 38 and I was in first grade to keep her skills up, maintain credentials, and get higher certifications in her job. For the longest time we lived with one of our cousins but knew she would be home every two weeks. She set the example for me to work hard and go to school.” 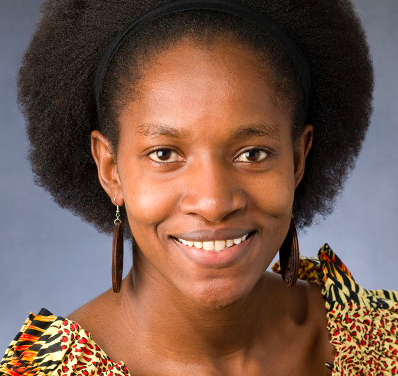 Kenyan native Angela is a shining example of the immense power of mentors, sponsors and a network. From Nairobi, to engineering school at University of Kansas, to her first job as an electrical engineer at a global company, it was the support along the way that gave her courage, guidance and the ability to succeed.