Walking into May Khoury’s store, Badr Adduja, in Amman, Jordan is a remarkable sensory experience. Magically, May has somehow created a serene environment to showcase her uniquely designed, eye-popping art, furnishings and clothing.

As I spent time with May, I quickly realized that her designs are an extension of her: grounded deeply in her past while simultaneously fresh, modern and forward-looking to the future.

May is a proud Palestinian single mom to three children and five grandchildren. She was married at the age of 19 and widowed at the age of 43. This tragic and powerful moment was a catalyst in her journey to become an entrepreneur. Because her family lost most of their assets and savings for medical expenses to treat her husband, May’s family ended up with the very minimal of financial support after losing him.

Despite the fact that May had received a scholarship, she wasn’t able to pursue college and higher education. Instead, she enrolled in different courses of interest and did voluntary work at NGOs. During the four years she worked as the Director of the Jordan Crafts Center, she found herself, her passion and mission in life: to design beautiful art, furniture and clothing that combined the best of the past with a vision for the future.

“I found that having your own business expands your work options and can be immensely liberating,” May said. “Today, I work with more than 30 artisans to produce our designs, ensuring them income stability while sustaining their traditional skills and preserving the richness of Arabian culture and heritage. Pride and appreciation for our culture has been innate in me, having grown up in an environment surrounded by embroidered traditional dresses and many beautiful traditional crafts.” During 1999-2013, May was awarded in 2002 second prize by UNESCO for best handicraft design in the Arab World. Then, in in 2013 she won the prestigious Silver A’ Design Award (an international award given to top fifth percentile designs that have achieved an exemplary level of excellence in design) for a coffee table called Lagan.

“As a result of this award, I envision Badr Adduja a one of the most exclusive, innovative houses of design in the Middle East,” May said.

After May’s 14 years of experience as a business-owner, she shares her advice to women who also strive to be successful in their careers and businesses:

“Your success will be affected by the following:

Regardless of your definition of success, there are musts that have to be fully developed, implemented and managed:

“Effectively providing value is integral to the long term success,” May said. May has had to overcome many obstacles and challenges, both personally with the death of her husband, and professionally as she built her business without any financial help, and tried to live out her design visions in a place that sees arts and crafts as mere accessories. She believes it can be more. “I am trying vigorously to attract the younger generation to my store so they can more greatly appreciate their heritage and national identity,” May said.

May is proud that her example has inspired two of her three children to start their own business, following their own passion. “I wanted to succeed because of my belief that successful women are not only making a difference to family life, but also by realizing their own innate potential, they are improving society for everyone,” May said. 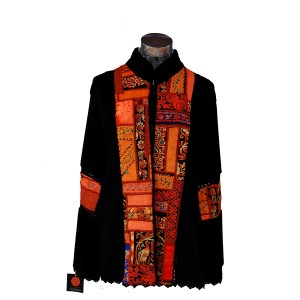 I couldn’t have possibly left May’s gallery empty-handed. One of the many unique items that caught my eye was long jacket, made with strips of beautiful, old embroidered Turkish cloth, combined with a striking red fabric. Every time I wear the jacket, I am reminded of May’s will to not to let the past define her but to make it into something new and completely different – not only for herself, but for Jordan, the Middle East, and women everywhere.

Be sure to join Badr Adduja’s group on Facebook. Based in Amman, Jordan, May has found that having her own business is immensely liberating. Her passion and mission in life is to design beautiful art, furniture and clothing that combined the best of the past with a vision for the future.

Learn how her life's greatest struggles and challenges became a catalyst for her business success today.