5 Examples of Microaggressions in the Workplace Microaggressions against women persist. The New York Times recently published an article about sexism, harassment, unequal pay and daily microaggressions at Sterling Jewelers. In the same week, Whitney Davis shared her experience as a black woman working at CBS and the macro and microaggressions she experienced there – one example:

“There were two black women working in production on the broadcast — myself and another. We both held the lowest-ranking positions on staff. Not uncommon in most predominantly white institutions, most of our white colleagues had trouble keeping our names straight. As a joke, they began to call us We-Dra — short for Whitney and Deidra.”

During my keynote presentations, I ask audiences of men, managers and leaders how they deal with the microaggressions that they witness in the workplace. Typically, only a couple of people have a ready answer.

Confronting someone’s negative or biased behavior is difficult. One of the best ways to do so is to be prepared with what you’d want to say or do to address negative behavior. But first you need to know what to look for.

Macroaggression occurs on a systemic level. For instance, unequal pay practices or conditions for a certain group of people. In contrast, microaggressions are intentional or unintentional verbal or nonverbal behaviors that occur in everyday interactions. They are often unacknowledged, and casually degrade, demean, or put down someone who is part of a group (for instance, a gender, race, or ethnic group). According to this research, 64% of women are exposed to this form of discrimination, with non-white women experiencing it more than anyone else. 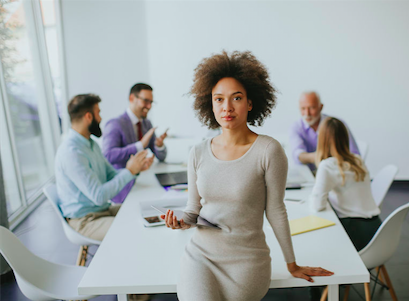 Microaggressions can be around race or gender. Gender microaggressions include sexual objectification, the use of sexist language, making assumptions based on gender, the use of sexist humor, slights, insults, or using a derogatory analogy. Some of these subtle and not-so-subtle actions or comments may not seem like a big deal and one incident in isolation may not be. But, in reality, these types of incidents inhibit women from doing their best work, being optimally productive and undermine their success. Women and people of color (POC) cite these types of disrespectful, sometimes toxic behaviors as one of the factors that influence their decisions to leave a job. A steady diet of microaggression disconnects and wears people down. When they cite these types of behaviors as factors that lead to a reluctant decision to leave a job that they otherwise like, they describe it as “death by a thousand cuts”.

Here are five examples of microaggressions in the workplace:

Microaggression 1: No, I’m not your sweetheart

Calling women by seemingly endearing names is often not appreciated and many women find it offensive. For example, the leader of a very large company in Latin America shared with me how much she hates it when one colleague calls her reina.

As one woman at a New York City tech start-up company told me, “I’m constantly aware that I am the only women that works at the company, as I am regularly told how much ‘nicer’ I am to work with than any of the other guys at my company.” Although this may seem like a compliment, that’s not how most women would take it. Women who negotiate for a promotion or an increase in their compensation are 30 percent more likely to receive feedback that they are “bossy”, “too aggressive”, or  more “intimidating” than men who negotiate for the terms of their compensation.

This type of microaggression occurs when people describe a woman’s actions in ways that would not be used to describe a man who did the same things. For example, labeling a woman as too nice to be able to do a job, bossy, a drama queen, too aggressive, needy, high-strung, and so on.

Observations of venture capitalists in Sweden, of all places—one of the most gender equal countries in the world—show just how differently men and women are sometimes viewed. Entrepreneurs who pitched during 2009 and 2010 were described these ways. Male entrepreneurs were described as “young and promising” whereas women were described as “young and inexperienced.” Men as “experienced and knowledgeable,” but women as “experienced but worried.” Men as “cautious, sensible and level headed but women as too cautious and unsure.”

During a keynote presentation at a global company, a leader relayed how he regularly tells one of his female employees, a new mom, who often works late, that she should go home. I asked him if he asks the same question of new dads on his team?

Psychologists Peter Glick, Ph.D., and Susan Fiske, Ph.D., call this benevolent sexism. Their research indicates that men who exhibit this type of microaggression are less likely to give women candid feedback and challenging assignments. Direct, performance-based feedback and challenging assignments  are critical to everyone’s advancement and women already get both less than men do.

Benevolent sexism is believing or acting as if women are weak and need the protection of men. An example is thinking or saying that a woman would not want the same type of stress, workload or challenging assignment as a man.

Women report that they are regularly underestimated by colleagues and clients. At a Harvard Business School conference I spoke at, professional women shared these experiences: Touching women without their consent: you would think that this could go without saying, but it still happens. Your default should be to not touch the people you work with. Even though your intentions may be completely harmless and even “supportive physical contact” in your opinion – like putting you hand on a woman’s shoulder or arm – it should be avoided. One woman recently shared, “men regularly put their hand on my lower back when they pass by me, and I don’t like it”.

If you’re in a country where people automatically kiss each other’s cheeks, greet women according to culturally accepted norms if it seems to be expected. Follow the woman’s lead who you meet with, or ask a female colleague or coworker who lives in that country for guidance/advice.

Infringing on someone’s space as a microaggression is about more than inappropriate touching. Women express frustration that their male colleagues often disrespect their space. Examples include “manspreading“, leaving belongings on other peoples’ desks, and not moving out of the way to make room for others while walking down the hallway.

When we enter a room, we bring ourselves physically and we carry with us our privileges, societal expectations, and habits. Not being aware of your own behavior and demeanor puts the burden on your coworkers to figure out how to navigate them. As an example, if male, white, or upper level management, you bring much more than your body into a room.

What You Can Do Instead: Micro-inclusions

In the coming weeks we will be sharing quick impactful interventions – micro inclusions – that you can use to become a better colleague.

Eliminating slights in the workplace is the most minimal action you can take to remove obstacles to a level playing field and success.

In the meantime, here are a few things you can do:

Why Does it Matter?

From Rania Work with Women